Ray Brown of BROWN sits in for a song with South Road at a party on Sunday.
May 7, 2019 - So, a little history first. Before they were in South Road, Paul, Tom, and Will played in a band called BROWN, headed up by bassist, lyricist, singer, and all-around-bon-vivant Ray Brown. We played out a few times, rehearsed a lot, and had a blast for about six years or so. Ray up and moved to New Hampshire, but when he's down in Connecticut, it's nice to relive some musical memories. And that's what we did on Sunday at a friend's birthday party. Ray joined us for "Dead Flowers" by the Rolling Stones, grabbing Tom's Taylor acoustic and digging right in. It was a looser version that we do, and a lot of fun.
The gig itself was fun; we were returning to the spot that gave us our start a year ago. The owner of the house digs our sound and invited us back for his birthday party (which he shared with a friend, who was also celebrating). We played it safe; no debuts this time around, but the small-yet-appreciative audience had a blast, as did we. We have another gig coming up May 18, and this gave us a chance to practice a few more segues between songs. 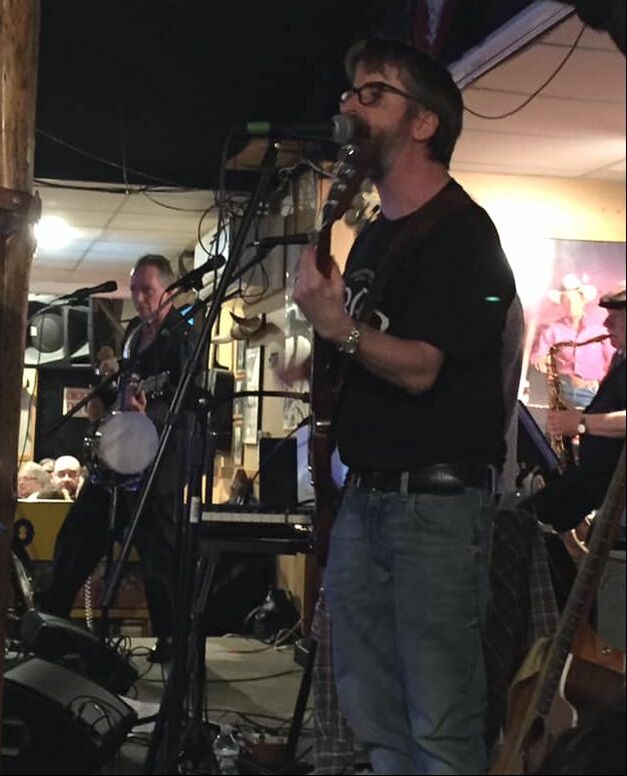 From the side of the stage at Chute Gates in Terryville, Conn., April 6, 2019.
April 7, 2019 - Nice show at Chute Gates Steakhouse in Terryville last night (into this morning...). We Tetris'd ourselves onto the raised stage, which was about as deep as it was wide. Playing for a "dinner crowd" has its benefits, as we were able to show off our quiet side as well as our dancers. Joan powered through despite not feeling great (the winter is lingering into the spring this year), and sounded wonderful as always. Will got to debut his tiny, might Roland Piano: Go, which fit the space just right. Try the chicken-fried steak! 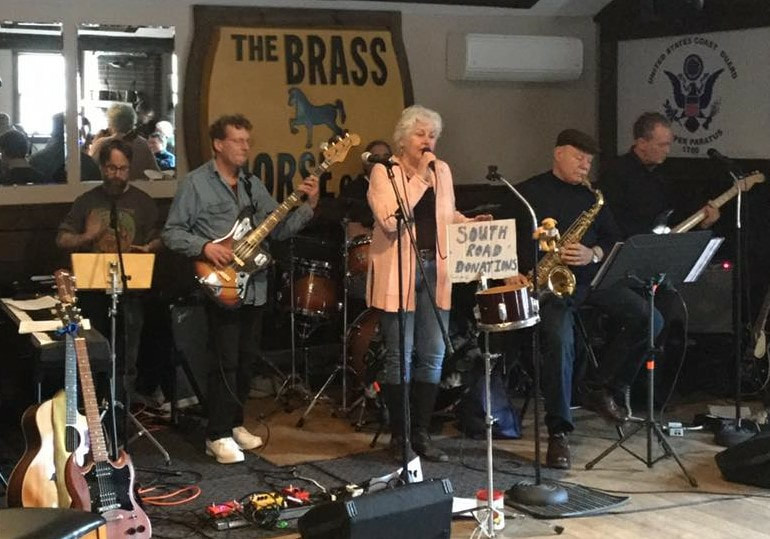 South Road at the Brass Horse Cafe, Barkhamsted, Conn. March 24, 2019.
March 25, 2019 - Brass Horse was jumpin' Sunday afternoon as we launched into an almost four-hour set (we started a bit late by request of the ownership). Lots of happy people swinging about to some songs that really came into their own. "Proud Mary" and "Tequilla" were especially well-received, as was "Bad Case of Loving You (Doctor Doctor)." We debuted our version of "Stand By Me" and brought back some Brass Horse favorites, like "Shaky Ground" and "Matchbox." Thanks to all who donated: we were pleasantly surprised at the generosity. Will learned he might need to figure out a new mic-stand situation, even in tight quarters, as using the same one for keys and guitar is a drag! That's what  you get for having a six-member band, and it's a small price to pay for our wall of sound. Will was particularly happy to play his Gibson SG 2018 Faded for the first time live, and she delivered admirably. Next stop: Chute Gates, April 6. Be there!
​February 18, 2019 - We are very excited for the next few months, when we have a steady stream of gigs lined up. It kicks off this Saturday, Feb. 23rd at Mulligan's in Torrington. We've been workshopping a bunch of new covers, a few of which we hope to lay on you starting at 8 p.m. There's nothing like a dead-of-winter rock and roll party to chase the winter blues away. We hope to see you there taking up dance space with moves you didn't know you had!
October 22, 2018 - Had a great time at the Brass Horse Cafe yesterday, playing for a lot of new faces. We debuted our original song, "Halfway to Heaven," and took on a version of "Shakey Ground" by The Temptations, made popular by Delbert McClinton. The new ceiling there looks really good, although it throws off the sound a bit for musicians. We think we've got the volume issue fixed. Last time we were accused of being too quiet (?!), so perhaps we reached a few more ears this time. The four-hour set sailed by.
July 30, 2018 - We've experienced a little down time, but yesterday Tom and Will met with musician and engineer Tom Mather to mix the results of our May 5 Kentucky Derby Party gig. Many thanks to Tom M. for the recording and mixing. We left his studio with nine tracks, available here: http://southroadband.weebly.com/recordings.html.
June 9, 2018 - Fun, lively crowd at Mulligan's in Torrington last night. South Road had the folks dancing and we blew right past our 11 o'clock end time for encores. This was the first time we played out with Elvis Presley's "Little Sister," and it went over well. We were squeezed in tighter than a snare drum head, but that only made us play like the single powerhouse unit we are! "Lilly Mae" got pretty much everyone who was able to dance on their feet, including one especially athletic woman who did some high kicks you wouldn't believe. It was a happy anniversary for saxman Mel, and a grand time for the rest of the sextet. Many thanks to Mulligan's!
May 19, 2018 - Fun night despite a thin crowd at Spring Jam at the Swedish Social Club in Bristol. No matter how many we have in our audience, we always give it our best. It was a tight one-hour set with highlights including a soulful rendition of "You'll Lose a Good Thing" (originally done by singer/guitarist Barbara Lynn), a raucous cover of Buddy Miles' "Them Changes," and an impromptu shot of Sam Cooke's "Twistin' the Night Away." We were followed by Ax Factory and Unfinished Business. Many thanks to the Swedes for having us!

Photo by Tom Plazza
May 15, 2018 - Mother's Day was spent jamming for a three-set afternoon at The Brass Horse in Barkhamsted. It was the first time this version of the band had a chance to play there, and South Road was the first band to play in the newly renovated space, complete with soundproofing. We had a blast! Folks were up and dancing by the second set, and we rocked the joint. Highlights were a killer, extended version of Carl Perkins' "Matchbox" that was a real stomper, and "Shakin' All Over," which went over very well. Mothers and others swooned for Mel's sax, as usual, and the crowd went wild for Joan, a Brass Horse regular. We got a video of the performance on our recordings page, so check it out!
May 7, 2018 - Just enjoyed a fun show at a friend's in Harwinton. It was our a Kentucky Derby party, complete with a race pool. The best part -- along with friends and family -- was that we had professionals come to record the music. We're talking full-on microphones-all-over-the-place recording. We'll make sure to get those up on the site as soon as they're ready. 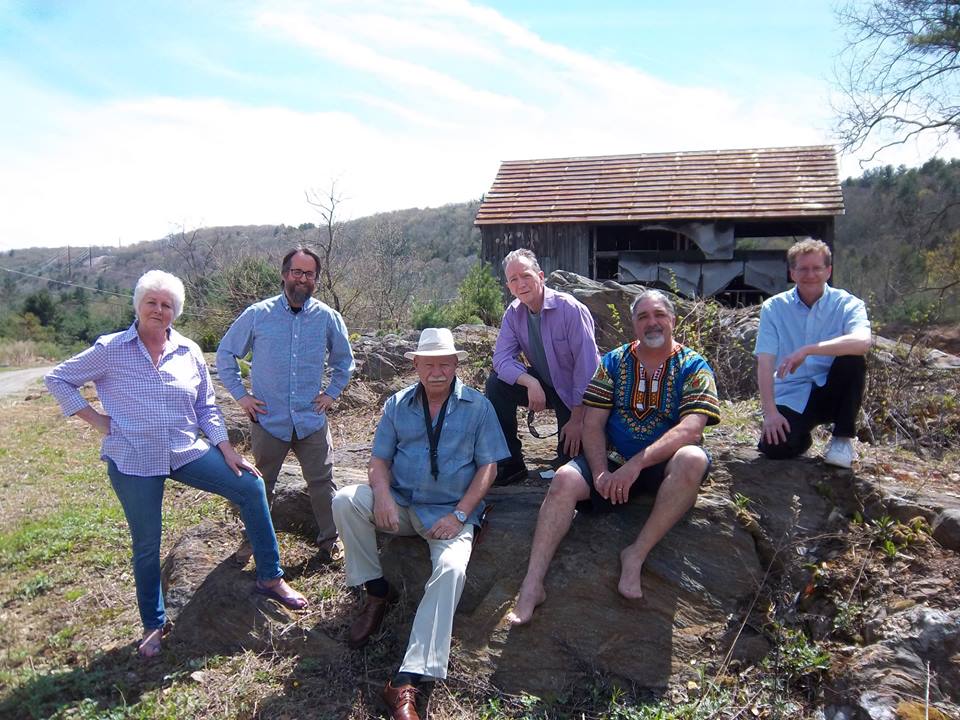 April 29, 2018 - What a month May will be for South Road! We've got the private party in Harwinton, which will include three sets of good rockin' tunes, on May 5th; our first gig at Brass Horse in Barkhamsted on May 13th; followed by an return appearance at the Bristol Swedish Club Spring Jam on May 18th. We're learning some new songs, as well, including "Shakin' All Over" by Johnny Kidd & the Pirates,  "Summertime" by George Gershwin, and "Around and Round," made popular by the Rolling Stones. We're up to about 48 songs that we know either extremely well or "nearly have it."
April 7, 2018 - Plenty of action coming up for South Road. We're gearing up for a private party in Harwinton on May 5th: a combination Cinco de Mayo and Kentucky Derby celebration. In between rehearsals we like to support our band members in other ventures, like lead singer Joan Schroeder, who recently sat in with her son Jerrod's four-piece jazz band do sing some standards and blues at Sasso's in Torrington. One stand-out was certainly "House of the Rising Sun," made popular by the Animals in 1964, but stretching back way before that as a traditional folk ballad. 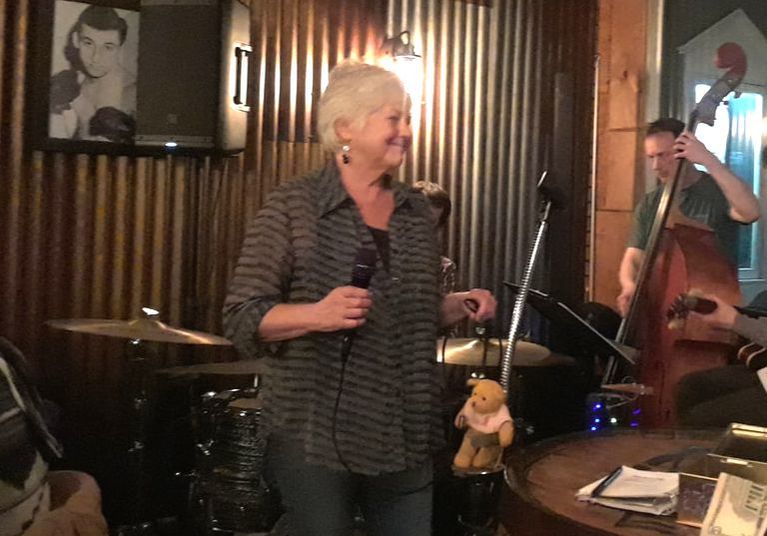 Joan at Sasso's in Torrington, April 4, 2018.
March 25, 2018 - We had a fun, three-hour show last night at Mulligan's in Torrington. Plenty of happy faces in the crowd as we tore through two sets of R&B and rock. We played a few songs for the first time for an audience, including "American Girl" by Tom Petty, "You Don't Mess Around with Jim" by Jim Croce (with Tom on lead vocals), and "You Wear It Well" by Rod Stewart (with Will on lead vocals). The night included a guest singer on "Chain of Fools" and a little bit of enthusiastic dancing.
The space was tight for a six-piece outfit like ours, but we made it work. We'd love to return to Mulligan's. Our next public live date is May 24th at Brass Horse in Barkhamsted, but we are looking to book. If you're interested or know someone who would be, contact Will at willsiss@gmail.com. 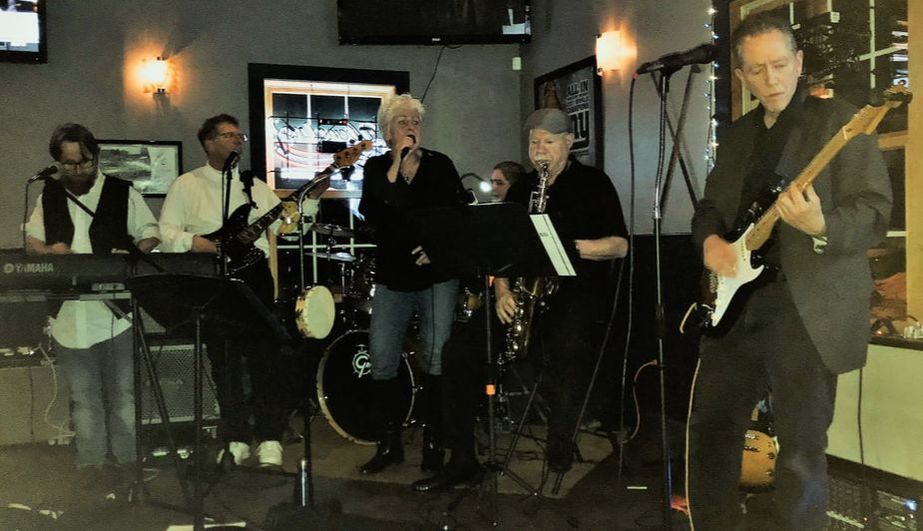 March 11, 2018 - It was a blast to see some members of South Road out gigging with different bands this week. Tom played out with D. Smith Blues Band at Mulligan's to an appreciative crowd, and had a chance to feature some new original songs. Todd and the Renegades rocked Chute Gates in Terryville to a lively, packed-in audience.
Just a few more weeks before we combine forces to play Mulligan's in Torrington. We'll have to get creative about how we position all six members, but no matter how we arrange it, the audience will be in for a treat. We'll be playing songs we haven't played out yet, which is always exciting. Some are dancers, a few are some rock classics perfect for sing-alongs. 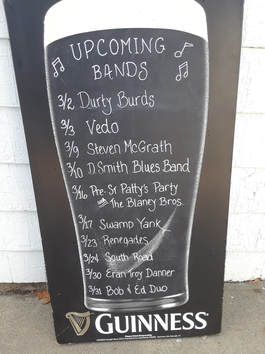 March 3, 2018 - We had a great rehearsal last week, working out the kinks in some of our favorite songs, including Wilson Pickett's "In the Midnight Hour," Rod Stewart's "You Wear It Well," and "Sugar Coated Love" as recorded by Lou Ann Barton.
After a successful set at the Bristol Swedish Social Club, South Road is excited for its next gig at Mulligan's in Torrington on March 24th.  It's an intimate space, and we'll fill it with great dance music. On March 10th, lead guitarist Tom Ethier's other band, D. Smith Blues Band, will play there. And on March 23rd, the night before we play there, bassist Todd Russo's other band, The Renegades, will rock Mulligan's. We can't wait to see you there!
In other side-band news, lead singer Joan Schroeder will be playing with Last Train Out on Friday, March 16th at Chute Gates in Terryville.